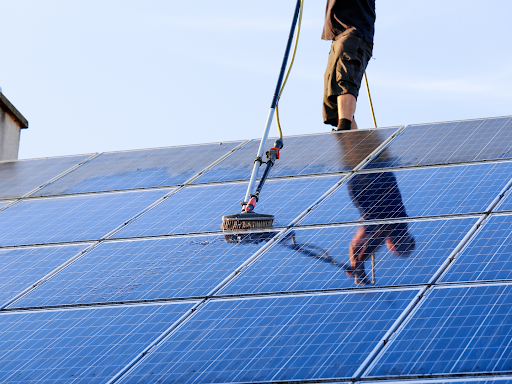 To convert light energy into electrical energy, a solar panel is a sophisticated technology. And the more light it receives, the more energy it will produce. Several pollutants can build up on solar panels due to their position in the sun, including bird droppings, smog, dust, grass residue, pollen, etc. Particulate matter impedes the generation of power at the panel’s output because it blocks light from reaching it (which is declared by the manufacturers). Premature degradation of the crystals and the panel as a whole are the second major reason for solar panel cleaning. This is a squandered opportunity in the long run.

Because of this, the solar cells’ surfaces must be kept clean if the generated electricity is to match the expected value.

Did you realize that unclean solar panels can lose as much as 20% of their power? This has been noted by the Solar Energy Association of Great Britain. According to the National Renewables Laboratory in the United Kingdom, this number should be increased to 25%. Dirty solar panels can lose half of their efficiency compared to clean ones, according to recent studies at universities.

Make the most of your investment in a solar power plant after putting in the time and money.

Why does rainwater not clean your solar panels?

Look at your car’s windshield to see why rain isn’t able to clean solar panels. Is it safe to drive with an unclean windshield for six months? It will eventually become green if dirt is left on the windshield. Dust particles in the air are deposited and adhere to the surface of the rain after it has evaporated, even if it is raining on the car. Due to the same weather conditions, your solar panels are in the same condition as the edge of your windshield.

Visibility through the windshield is compromised as a result of the reduction in light. Solar panels can be cleaned using the same methods. Maximizing the amount of light entering the solar panel is critical to maximizing financial returns. When we use our equipment, we clean the entire panel, both the center and the frame.

Why would it be necessary to invite professionals?

This seems like an easy job, but there are numerous subtleties and dangers to consider. In addition to the potential for electric shock, there’s also the potential for injury due to a misstep by the washer’s operator. There are a slew of issues that can arise at your location if you bring in an inexperienced business. Furthermore – unqualified contractors are unable to perform their duties or perform them in a careless manner that disregards current technology.

Big Apple Windows is a full-service cleaning company that also cleans solar panels among the hundreds of solar panel cleaning companies. We are capable of promptly treating both commercial and residential properties. It doesn’t matter where your solar panels are placed; we’ve had great success with both ground-mounted and rooftop solar panels.

Contact us right away to learn more about how we can help you with solar panel cleaning.